How Saying Thanks Increases Productivity 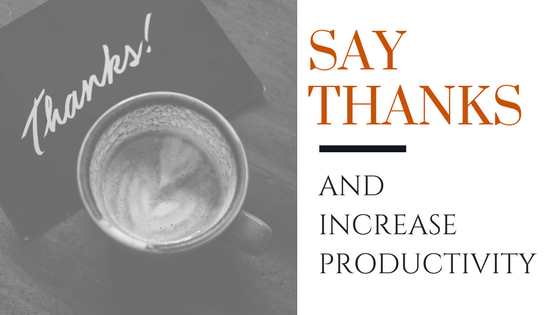 Why should I thank him?  He was just doing his job

If you’ve ever thought this, read on.

Saying thanks to your team will increase productivity

Yes, I know.  You expect everyone on your team to do a great job.  To strive to exceed expectations.

But just put yourself in their shoes.  Think of a time when you worked extra hard on something.   Maybe putting in long hours and higher than normal stress levels.   You sit back when you finish, tired but proud of the work you’ve done.

And you hear nothing more.

Admit it.  It would’ve been nice to get some thanks.  To have your boss walk past and say  ‘thanks for that report. It was great work’

Saying thanks is easy.

Of course, your team member may work harder because of the recognition

But there’s more to it than that.

Your team members waste time when they don’t get thanked.

Doubt is the consumer of too much time.

When you don’t show appreciation for good work, how will your team know to do more of the same?  If they receive no feedback on their work,  they may question whether their work is good enough.   A simple thanks give them a reference point for next time.

By not giving feedback – either good or bad – too much time is wasted ‘interpreting’ what you might have wanted.

Team members waste your time when they don’t get thanked

Frustrated that your team can never make a decision on their own?  Are they always at your desk or copying you in emails to get your approval?  That could be because you’re not giving them the confidence to do it alone.

We are very quick to say ‘don’t do it like that’ but how often do we say ‘do more of this?’

You want your team members to be working at their best.  And to do that, they need to know what you consider to be their best.

When I run coaching for managers I give them key competencies to rate themselves against. I give the same survey to their manager to get their feedback on how that manager is doing.  Often, the manager I’m coaching doesn’t think they are doing as well as their manager does. Most of the time they are unaware that their manager rates them so highly.

Saying thanks makes you more productive too

In this Forbes article Amy Morin tells us there are seven scientifically proven benefits of gratitude.  An improvement in your psychological health, for example, means you will spend less time battling those toxic emotions such at envy, resentment, frustration and regret.  And with gratitude, comes a better night’s sleep.  Just for saying thanks?  Who wouldn’t want that?

Along with benefits such as better relationships and improved self esteem, saying thanks must surely have a positive impact on your performance too.

What have you got to lose?

So even if you’re not the type of manager that says thanks to people for doing their job, I’m sure you’re a manager that wants a high performing team.

Why not give this a go today.  At worst, you’ll make a team member smile.  But you may make them more productive too.