Zoom Fatigue – Why Is Video So Exhausting? 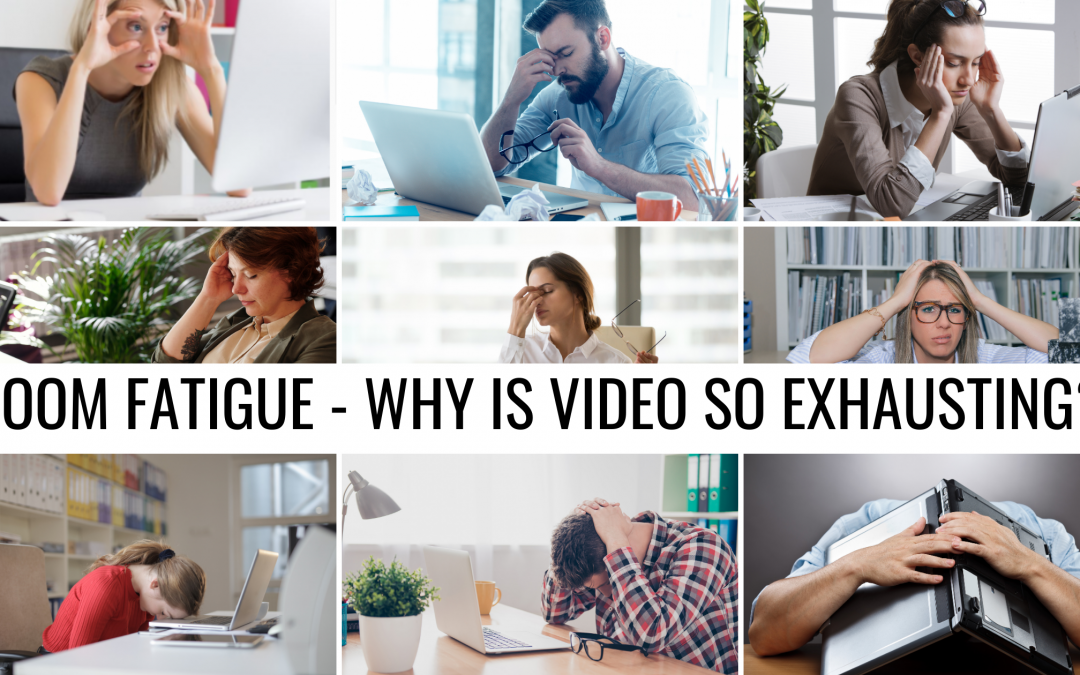 Do you have a Zoom face?  A half smile maybe, head slightly tilted, the occasional nod?

With video, there is no downtime.  We have to look more attentive and aware of what’s going on – a problem we didn’t have in the days of conference calls.   Even in a meeting room, we can sense when people are looking at us.  On a video call, who knows!  So that ‘interested and engaged’ face just doesn’t get a break.

And if someone had told me I’d be looking at myself on camera for hours every day in 2020, I may have invested more in anti-ageing creams and less on chocolate brownies.  For anyone like me who doesn’t even dally too long by a mirror, this is exhausting by itself.

Zoom fatigue is real.  For many people, our calendars are full of back to back video calls. Being ‘live to the world’ for many hours a day is exhausting. But according to research, there is more to Zoom fatigue than just being on show.

‘Humans communicate even when they’re quiet. During an in-person conversation, the brain focuses partly on the words being spoken, but it also derives additional meaning from dozens of non-verbal cues, such as whether someone is facing you or slightly turned away, if they’re fidgeting while you talk, or if they inhale quickly in preparation to interrupt’

For most of us, perceiving these cues comes naturally and unconsciously.  However, these are hard to see or hear on video call.  We can only see people from the shoulders up and the possibility of viewing hand gestures or other body language is limited.  And didn’t our mothers tell us it was rude to stare?  But now eye contact is one of the only indicators we have.

So, it is hard to pick up the nuances that we see more easily in person.  This can be draining.  Our brain goes into a massive decoding exercise but without the usual signals to help it.   Hard work with just one person on the screen, exhausting when multiple faces are looking your way (Tip: move to Speaker view instead of Gallery view to give your brain a break)

So why is a good old-fashioned phone call less tiring?  According to Franklin it’s because ‘it delivers on a small promise: to convey only a voice’.  Our brain is not searching for anything else.

Phone calls are just less demanding.  You are not on show.  You can have a call while going for a walk or preparing the dinner.  All those little tasks you might have multi-tasked on during a conference call (I know we shouldn’t, but be honest we all did).  Well, they are still to be started at the end of a long day of Zoom.

Video calls are a good thing.  But why not treat yourself and others occasionally by not turning the video on.  Have a look at your calendar and see what meetings could be done without video this week.

I’m not sure there is a universal list of the meetings that should or shouldn’t be on video.  Make a judgement call and mix it up a bit.

And finally, if you’re worried that people will multi-task if you turn off the video, you may want to think about the content of your meeting and who actually needs to be there rather than the medium you use.  Maybe it shouldn’t even be a meeting in the first place?